Perfection in the Square

The 2012 Annual BMW Car Club Concours d’Elegance was our biggest Concours event to date!  While we had 42 registrations, a lot more BMW’s appeared on the Nelson Mandela Square @ Sandton City on the day, with about 75 BMW’s being on display.

This was perhaps partly explained by Ignition GT from DStv covering the event (which will likely be screened in mid December 2012).  Or by BMW Car Magazine from the UK being flown out by SAA Voyager to cover the event.  Or by the amazing BMW Race Car display by Pablo Clark Racing.  Or by the BMW SA M1 and 333i being on display with a whole host of other SA only BMW’s.  Or by it being BMW Motorsport’s 40th anniversary.

Whichever reason(s) you choose, it was certainly the busiest Concours on Nelson Mandela Square with me spending a good few hours directing traffic and parking BMW’s.

It all started some months back when one of our enthusiastic club members, Johann Venter wrote to Seb deLatour, Deputy Editor of the BMW Car Magazine in the UK about them featuring BMW owners in Turkey and Australia and other countries in the world, except for South Africa which had the first BMW Plant outside of Europe.  He told them about the Annual BMW Car Club Concours which always has a fantastic display of rare BMW’s for the public to admire.  They agreed to give us 4 pages of a future edition to cover the event.  But Johann didn’t leave it there, with BMW Motorsport’s 40th Anniversary and BMW South Africa having a rich heritage of South African specific BMW’s such as the 70’s E12 530MLE, 80’s E23 745i, E12/8 535iM, E30 333i and 325iS, he suggested doing a few “what’s in your garage” features of BMW Car Club Gauteng Club Members too.  Seb agreed that it was a great idea, but it would be difficult for them to fly out to South Africa with budgetary constraints.  No problem for Johann who then went to SAA Voyager and managed to get them to sponsor a return ticket for Seb to South Africa and back to London.

We then also told Ignition TV of the event who were very keen to cover the event.  They interviewed a couple of the Club Members with BMW South African specific cars– so watch out for the feature in mid-December 2012.

We then also contacted BMW South Africa to find out if they would be prepared to display their immaculate 1980 E26 M1 and their “24,000 km since new” 1987 E30 333i, which they willingly agreed to and dropped them off and collected them on the day.  We managed to arrange a BMW South African Motorsport display around the Nelson Mandela Fountain with the M1 in the middle corner with a mirror image of SA specific 530 MLE’s, 745i’s, 333i’s and E12/8 535iM and 325iS.

Pablo Clark Racing agreed to display their ex-Tony Viana Winston E23 745i Race Car and the E30 325i Shadowline Race Car as well as their Show Stopper – the mid 70’s E9 3.5 CSL “Batmobile” Race Car which made its debut.

BMW South Africa kindly provided the new BMW M6 Convertible for display as well as the X6 5.0i and the new 125i.

Sandton Auto put out a fantastic Lifestyle display of BMW Accessories and Clothing as well as providing some more new BMW’s for display such as the 6-series Gran Coupe.

The stars of the shows were of course the Concours d’Elegance entries and after the judges were briefed, they set off in the scorching heat to pick out the best of the best in the various classes.

After that, in ensuring years the car is then entered in d’Etat (if it is totally original with only options that were available from BMW or approved tuners such as Alpina or Schnitzer at the time – the radio needs to be original) or d’Elegance (if the vehicle is no longer totally original as it left the factory floor).

Winners of d’Etat and d’Elegance then get entered in d’Honneur Stock and d’Honneur Modified respectively.

In addition, various specific trophies have been sponsored over the years such as best BMW 2002, Best Classic, Best M Car and Best 325iS/E30.

These were all presented to the winners at prize giving with all 1st place winners getting a gift bag of BMW Original Care Products as well as the respective floating trophy for a year.  2nd and 3rd place winners received a Bridgestone sponsored prize.  All winners also obtained a special limited edition run of a BMW Motorsport poster printed by Pablo Clark Racing.

We would like to thank our sponsors BMW Original Care Products, Nelson Mandela Square and Bridgestone for making this fantastic day possible. 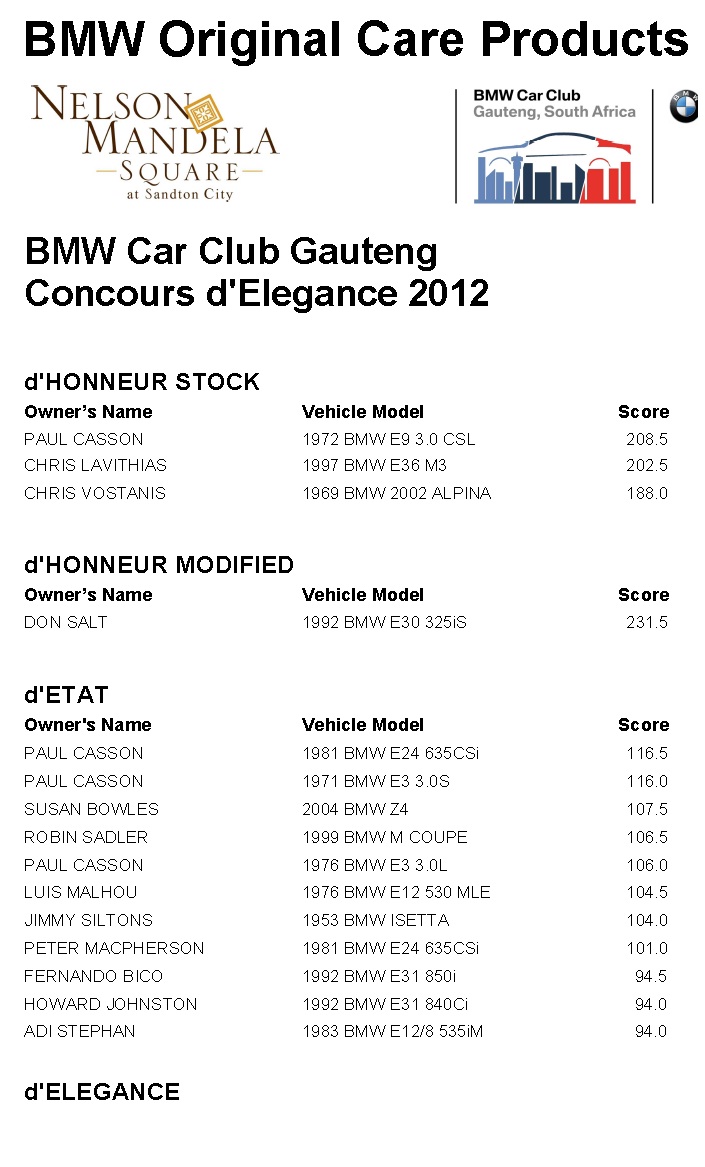 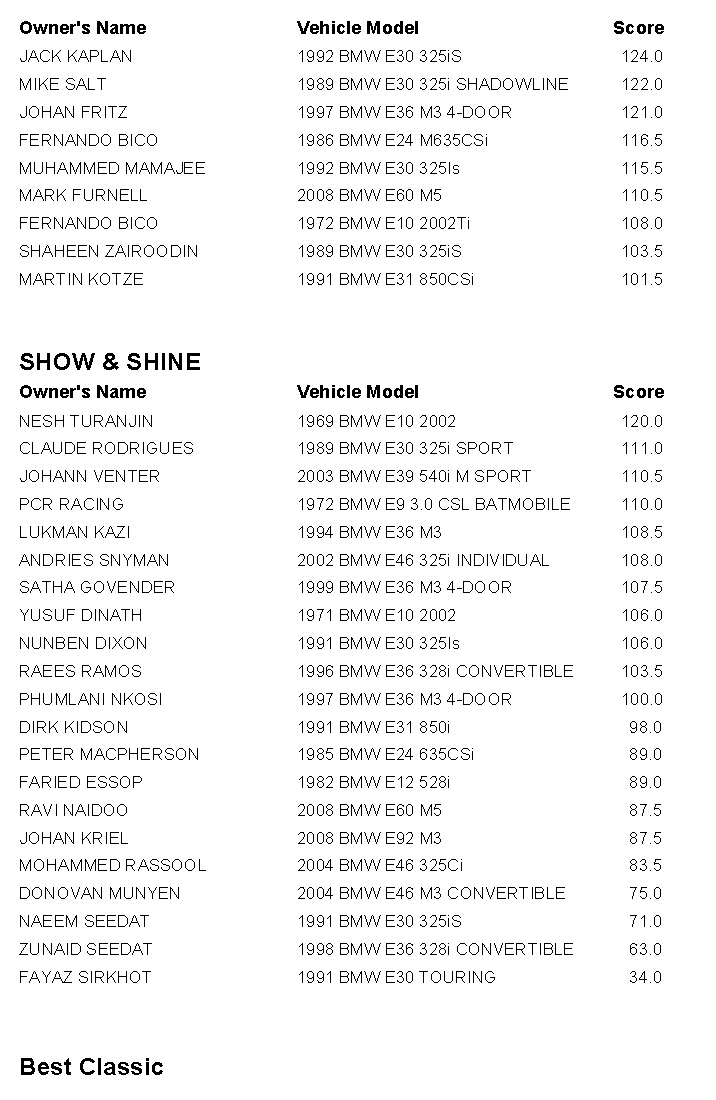 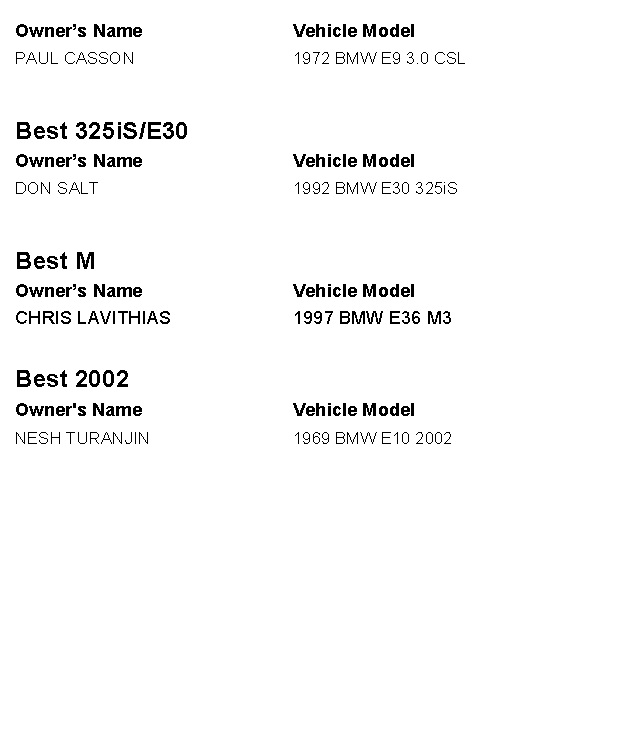 Fantastic goods from you, man. I have take into accout your stuff prior to and you are just extremely fantastic. I actually like what you have bought right here, certainly like what you're saying and the way in which wherein you say it. You are making it enjoyable and you still take care of to stay it wise. I can't wait to read much more from you. That is really a tremendous web site.
By: Emma Posted on: June 3, 2013, 1:56 am
Peculiar article, just what I needed.
By: Abby Posted on: May 29, 2013, 10:15 am
Heya just wanted to give you a brief heads up and let you know a few of the pictures aren't loading properly. I'm not sure why but I think its a linking issue. I've tried it in two different browsers and both show the same results.
By: Lucio Posted on: May 23, 2013, 4:32 am
Very nice article, totally what I wanted to find.
By: Beatris Posted on: April 27, 2013, 9:22 am
This article presents clear idea in favor of the new users of blogging, that genuinely how to do running a blog.
By: Frankie Posted on: January 15, 2013, 7:49 am
I've read some excellent stuff here. Definitely price bookmarking for revisiting. I wonder how so much effort you place to make this type of wonderful informative web site.
By: Jimmy Posted on: December 1, 2012, 12:13 am