past BMW vs VW 2014 Magaliesburg

past BMW vs VW 2014 Magaliesburg 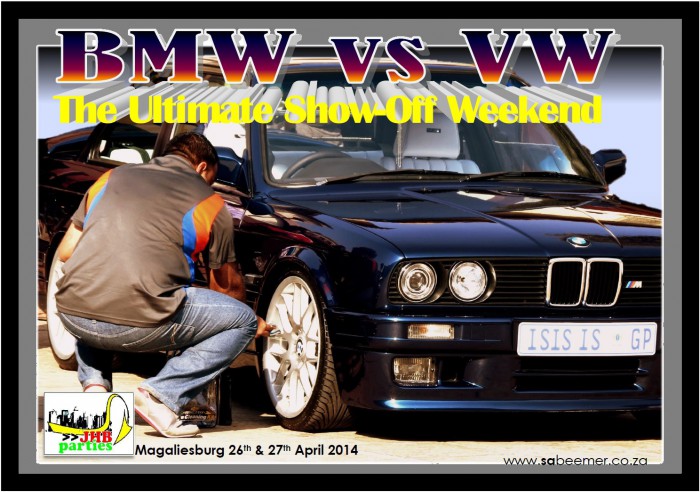 Us BMW guys would just laugh this question off and say “there is no competition between the two. BMW wins hands down. BMW is just a better car, and it’s in a different class”

But this showdown is very much a different kind of rivalry. It’s not about the technicalities of engineering or the status of the corporate brand nor its achievements. It is about the fans. At the end of the day no matter what car brand one supports, a car fanatic is a car nut.

Out on the streets where the car-culture is the strongest, die-hard loyals of the different car brands will argue to the end of time why they support the badge that they do, and it will be tough to convince them of any change to their loyalty.

And this is the basis that ‘BMW vs VW’ is grounded upon.

It allows an equal platform for everyone to enjoy a good show of cars for fair judgement, as well as good sportsmanship from participants. This coupled together with a  vibey atmosphere that JHB Parties is known for, promises an event that has cast itself firmly on the annual calendar.

This event takes part over the 2-day weekend, Sat 26th and Sun 27th April 2014, at Lovers Rock Resort in Magaliesburg.

Besides the highlight of the showdown between the BMW and VW cars that enter on the Sunday, there will also be a Sunset Pool Party on the Saturday at the resort.

For any more info regarding this and other events contact Rizo, president of JHB Parties directly on 071516 2157 email – jhbparties@gmail.com

2014 will da Beema’s keep da title? Or will VW leave da G-strings at there ankles J”

So cum’on Beemer guys, let’s show these V-Dubbers who is Boss! Even if we have to remind them over and over and over….. J 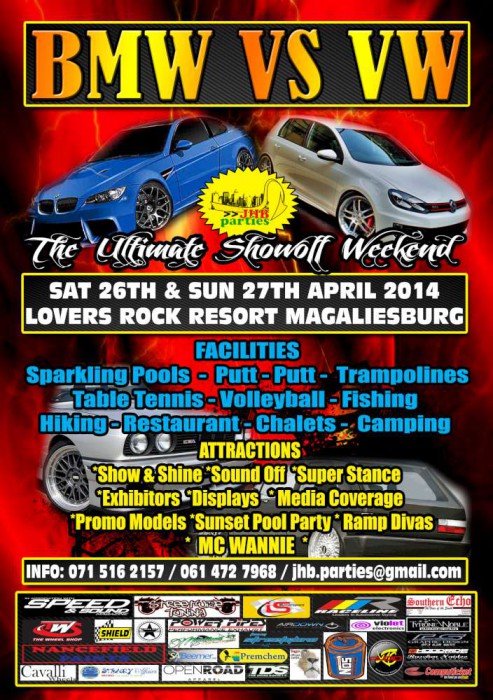