The range of vehicles offered by BMW is a vast selection of dynamic driving machines. I would say that in South Africa 50% of the BMW fans are E30 conformists, leaving 50% of the model range to the other cluster of fans. These fans are still purists though, because they enjoy and search for the exact same offering BMW had in the E30, but just in a newer, more comfortable as well as stylish form.

I always refer to E30s because I believe that it still holds a good reference point for us South Africans. At the recent BMW JHB Run I witnessed an owner of a brand new M6 staring at an immaculate E30 as it drove slowly past him. That, for me, was clearly a sign of appreciation in the true form. One can simply not take splendour away from an E30.

Our feature today focuses on an enthusiast of Sheer Driving Pleasure. No E30s in this article, but pure finery nonetheless.

Bouts Wagener is one of those Purists that boasts a fine selection of Bavarian Motor Works examples. 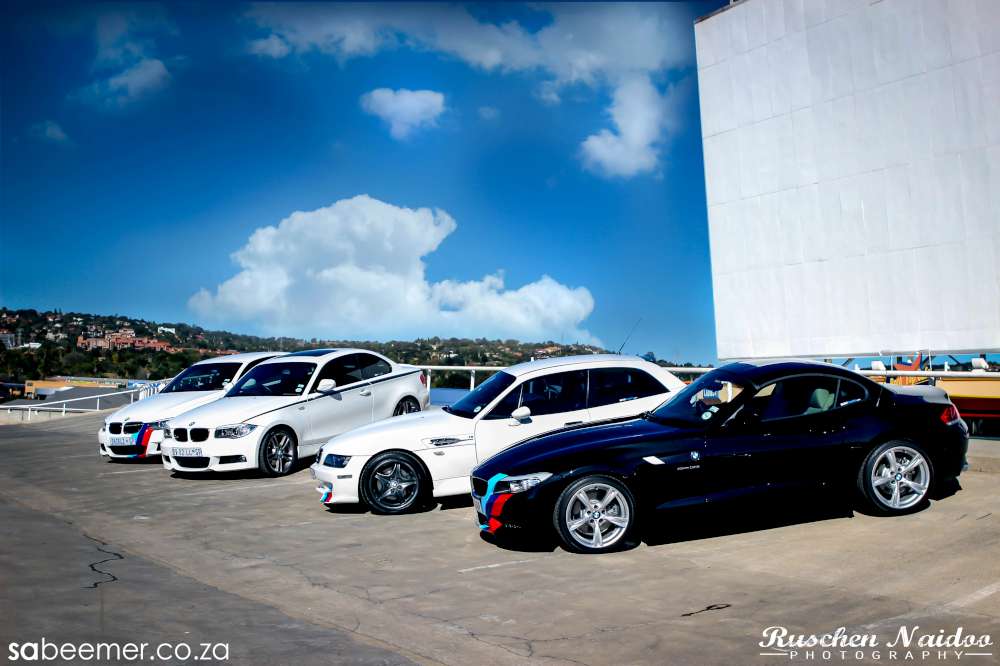 His fiancé Shirley sent us this jubilant description about him

'Bouts – a man who drives his passion...BMW! 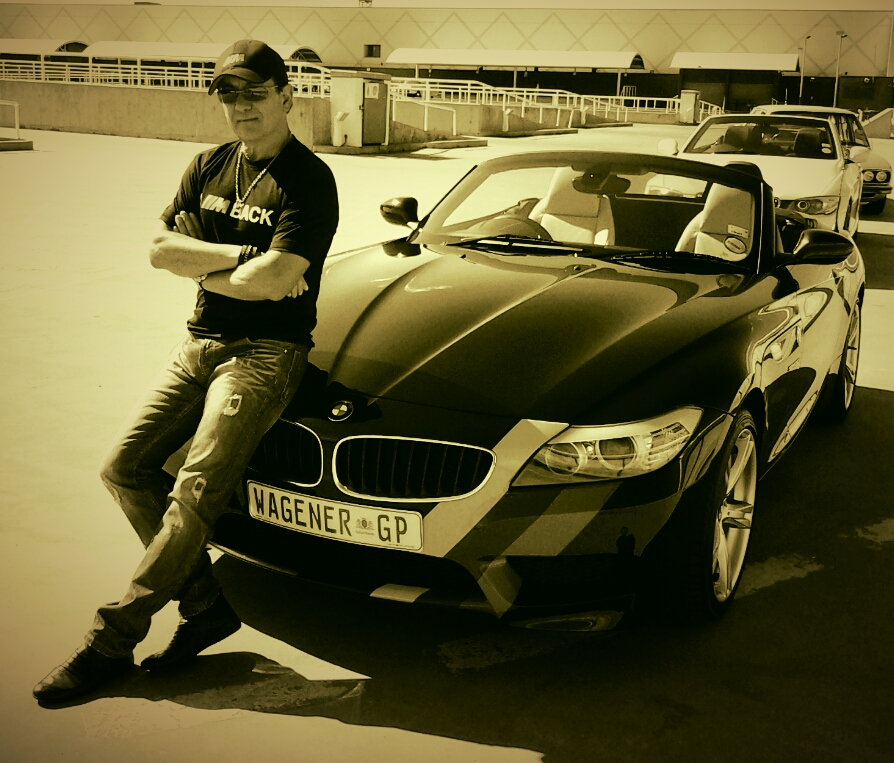 I have never in my life seen a man that is so passionate about his cars! My fiancé, Bouts, really loves his cars (they’re all BMWs – no surprises there!) to a point where he has named each one of them and has given them a personality in the way he treats them.

No one washes his cars except him and he actually looks forward to it…every weekend without fail!

His view is...and listen up guys...”would you allow someone else to ‘wash’ your wife?”

To Bouts, washing his car is like a man spending time with his girl – time flies and it is never enough, every moment is sheer pleasure, nothing else matters and he admires every part of her – that is Bouts with his cars! I don’t mind because that makes him a very special man. If anything, it keeps him out of mischief!

This past weekend, he cleaned every little hinge and crevice of Brutus with a toothbrush! He never misses washing the engine of a car every single time and as for the mag wheels…pristine and immaculate every time. His cars are absolutely undoubtedly showroom quality!

Bouts loves cars – period! He knows so much about cars going back in history – maybe it’s a guy thing but it’s incredible. Don’t get him started on car talk – you might need to re-adjust your day and cancel some appointments!

But I just love him…more than he loves his cars" 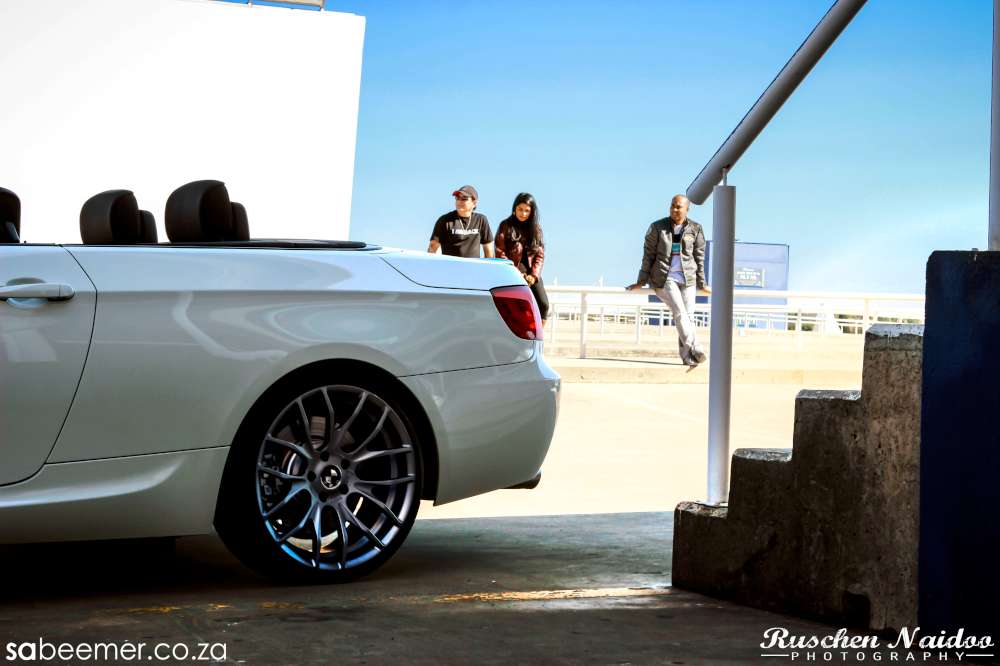 A brief historic insight written by Bouts himself -

“When I was a kid growing up in Windhoek, Namibia, we used to race soap-box cars in the neighbourhood where I lived.  All my soap-box cars were “BMWs”.  Later some of my friends whose fathers were in government in Namibia during the late 1970’s drove BMWs. It was mostly the E3 (3.0L).

My association with BMW started in February 1981 when I bought my first BMW. It was a 1978 BMW 528A (E12). She was gun metal grey metallic with white leather interior. I migrated from a 1974 Colt GS 2 to this car. I was 21 years old and it was a dream come true. I can remember the power, the solid feel, ride quality and those big windows. It was the ideal car to show a clean pair of heals to the Ford Cortina 3.0S and the XR6 of the time.

Shirley and I had the following BMWs and other brands:

Between Bouts and Shirley, they had 23 BMWs since 1981

Bouts describes the stand-out character of any BMW:

I would sum it up to say driver connection, safety, performance, styling, cutting edge technology and innovation. They are just beautiful cars. “Beauty and style in motion”.

The E89 is only used for BMW club events/weekend chill-outs, hence the very low mileage

What was done to the cars?

The cars have names as you will see shortly...

When we decided to buy the new cars in 2012 we opted to go the M Sport option on all cars.  It looks aggressive and offers value for the package, in comparison to doing suspension, or body panel changes later. We also had to think about the finicky BMW Motorplan requirements and its implications when you do modifications.

On “Tantrum”, the E89 (Z4) I had the option to buy the new 2.8i or the 3.0i version. The 6 cylinder was the car of choice even though it had just been discontinued then.  We love the 6 cylinder BMW engine…for now (I have to be convinced that new 4 pot engine sounds like a six).  I wanted a black Z4 to go with my black E86 3.0 SI to have two black Z4s.  Sadly the E86 was written-off a few months later by a guy from Ghana who came into South Africa that morning. He did not know that a red robot meant “stop”.  No changes were done to “Tantrum”, except a set of ///M stripes that draws so much attention from other road users, especially when in company of “Shirlz” on a freeway.  I’m plotting to colour-code “Tantrum’s” mags in Ferric Grey, similar to the 125 in due course. 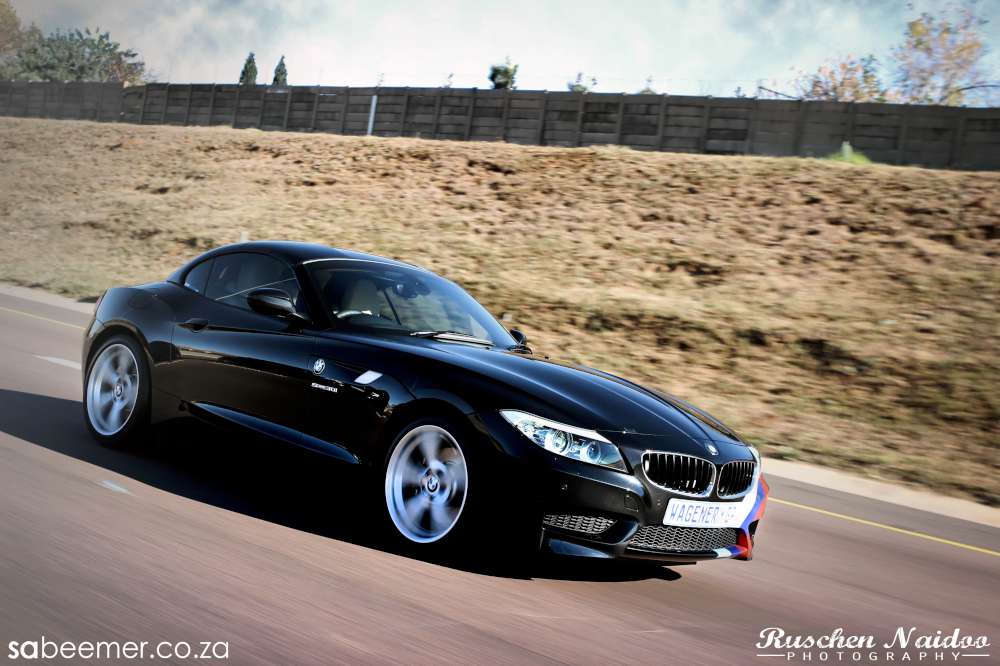 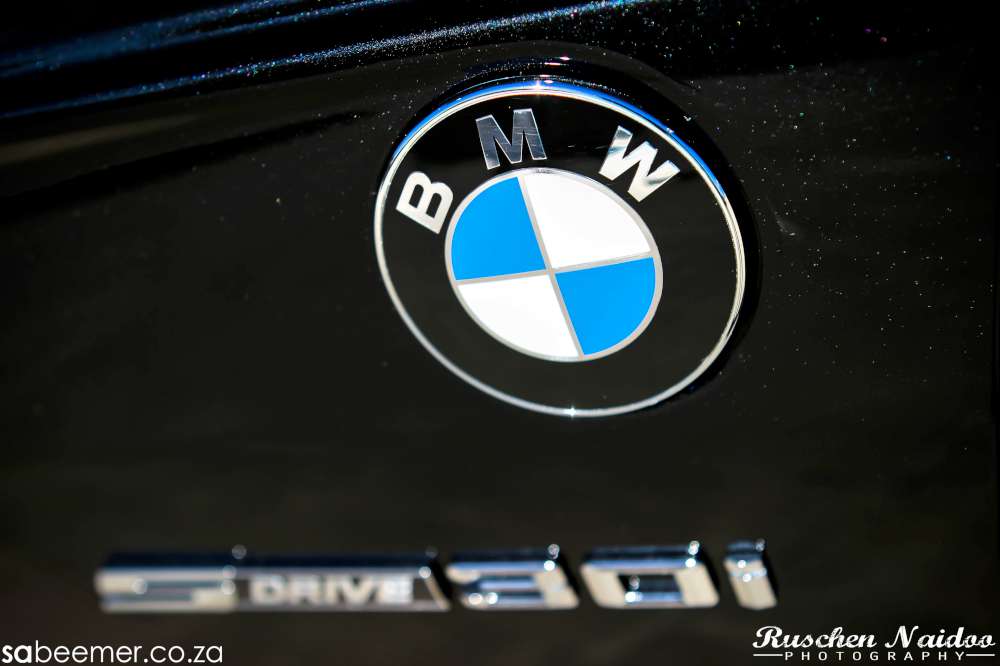 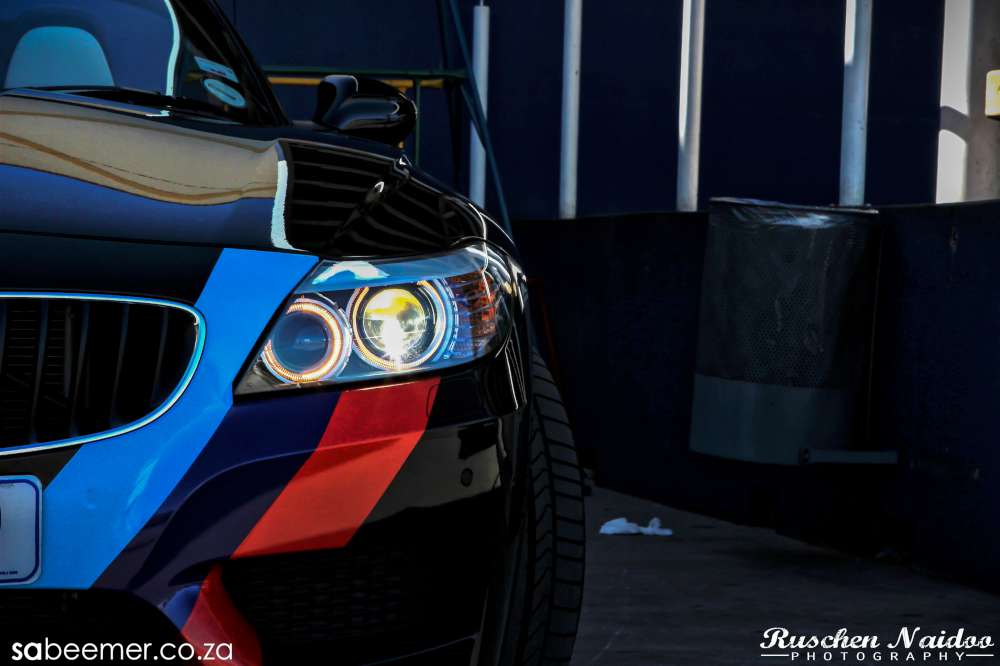 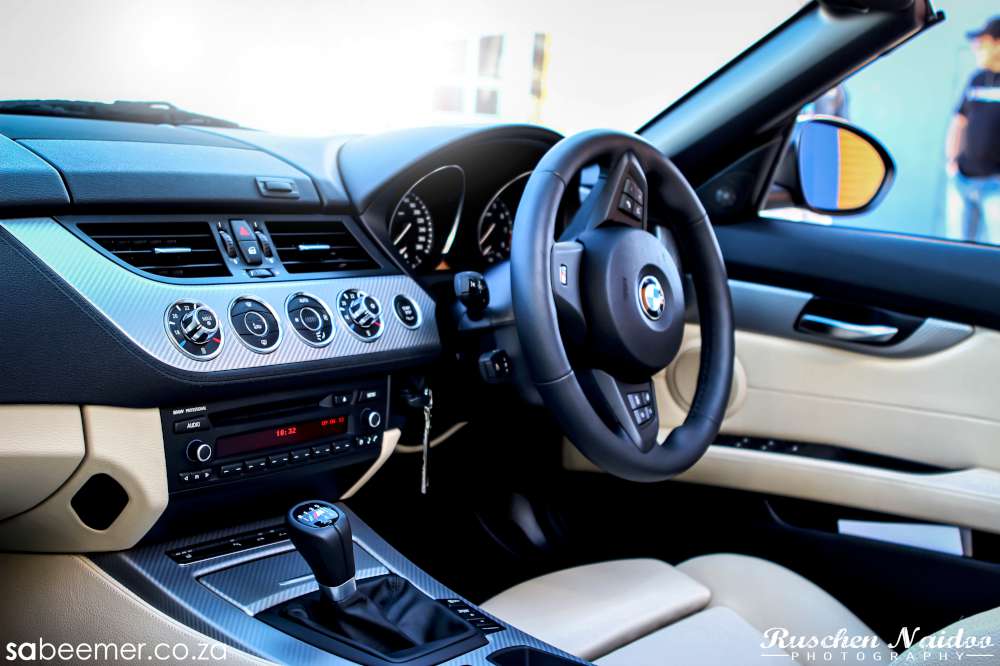 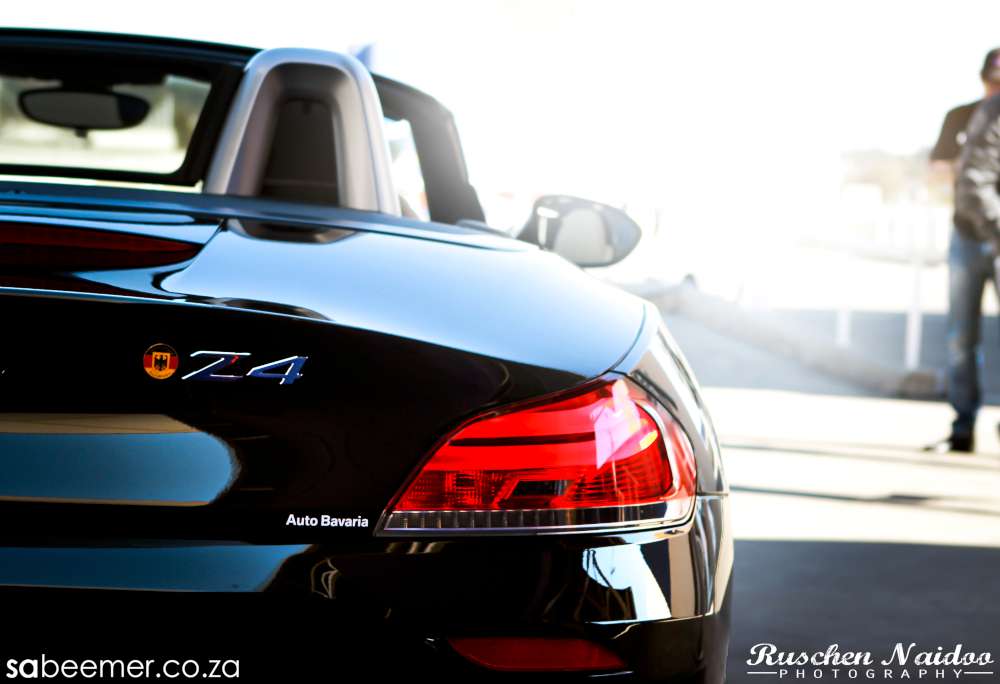 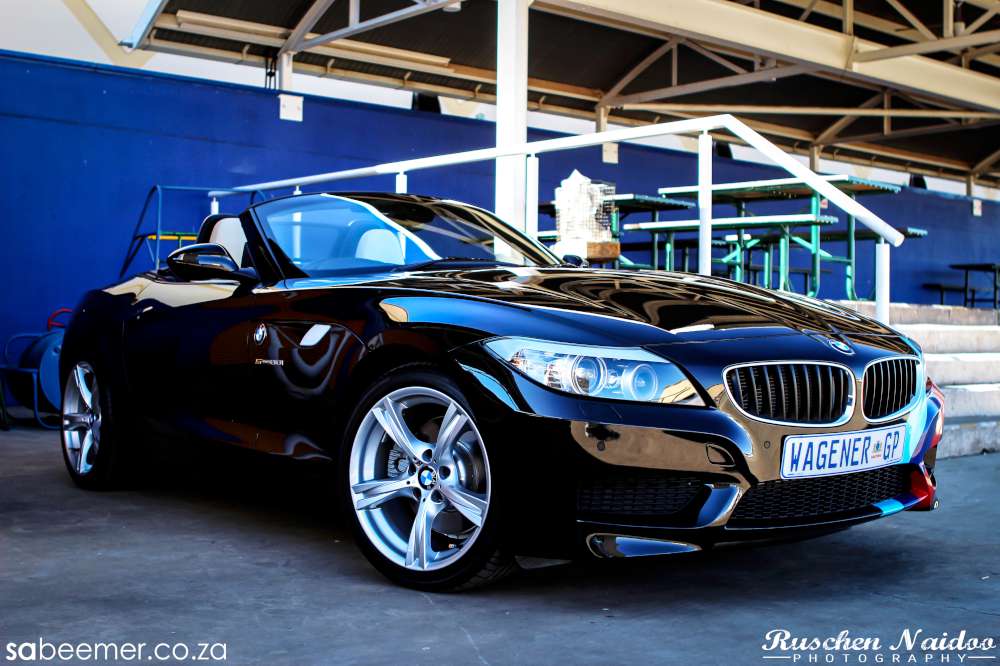 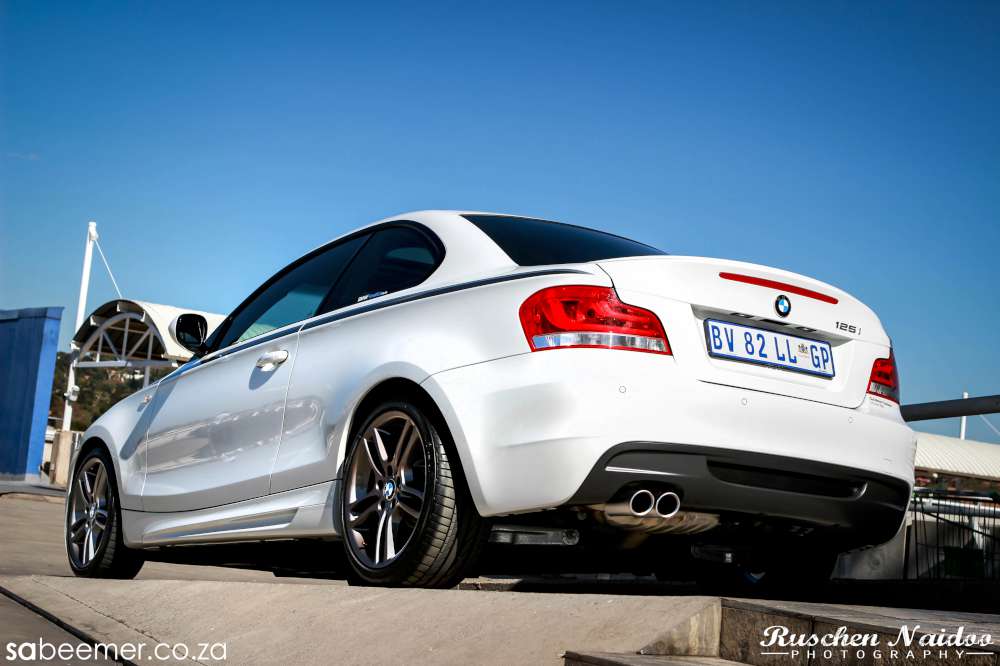 the E82 125 replaced the E 86.  When I had the choice, I decided in consultation with Kyle from Club Motors Fountains to fit the car with the BMW performance stripes and side sills.  I also requested him to obtain the colour codes and color-coded the mag wheels in the BMW performance colour, which they did for me.  It’s known as “Ferric Grey”. 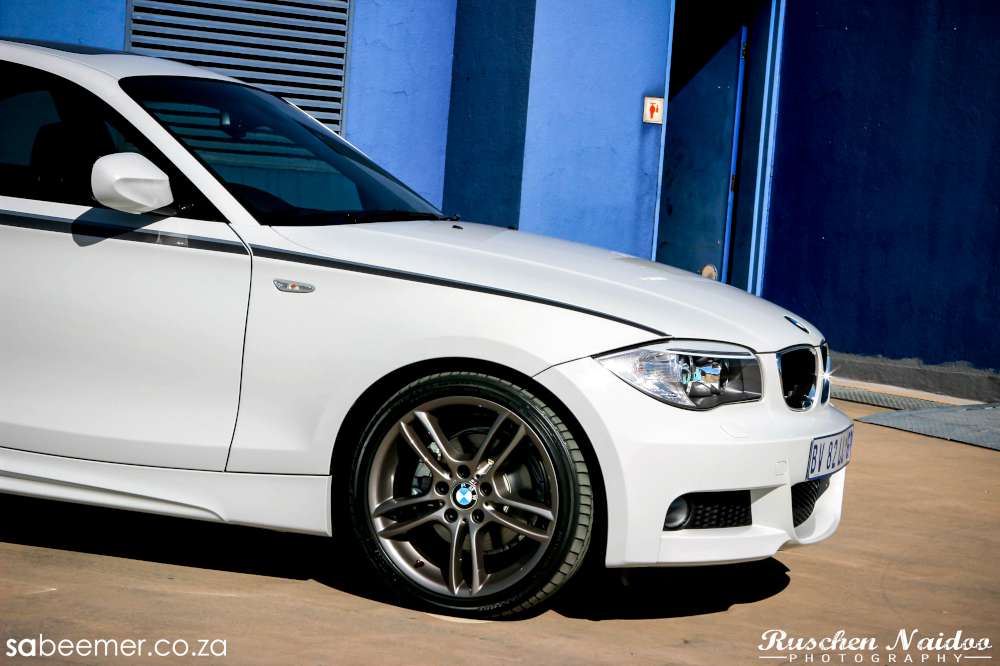 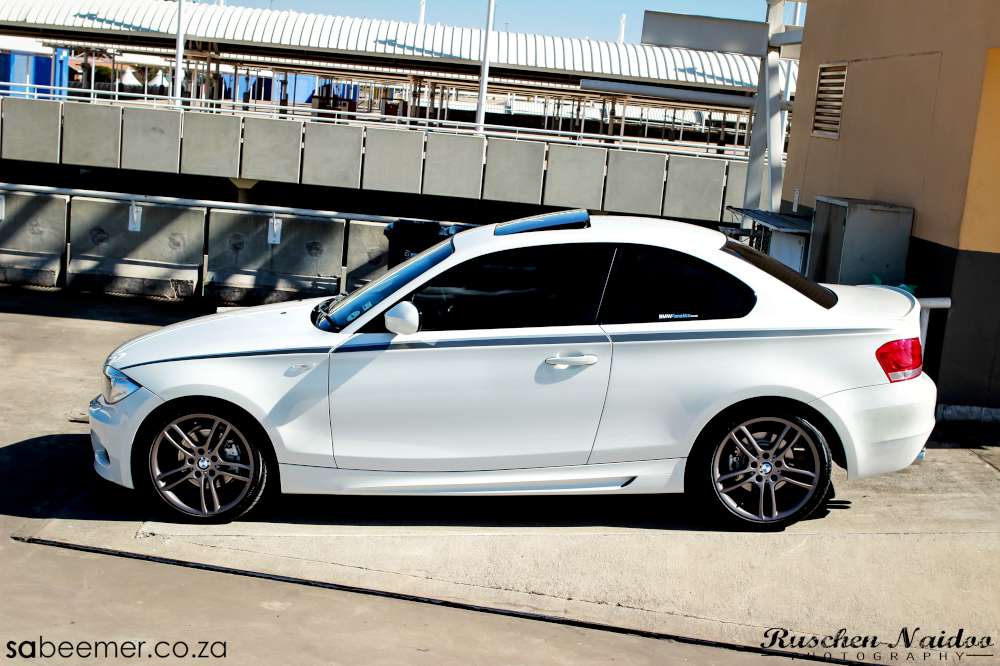 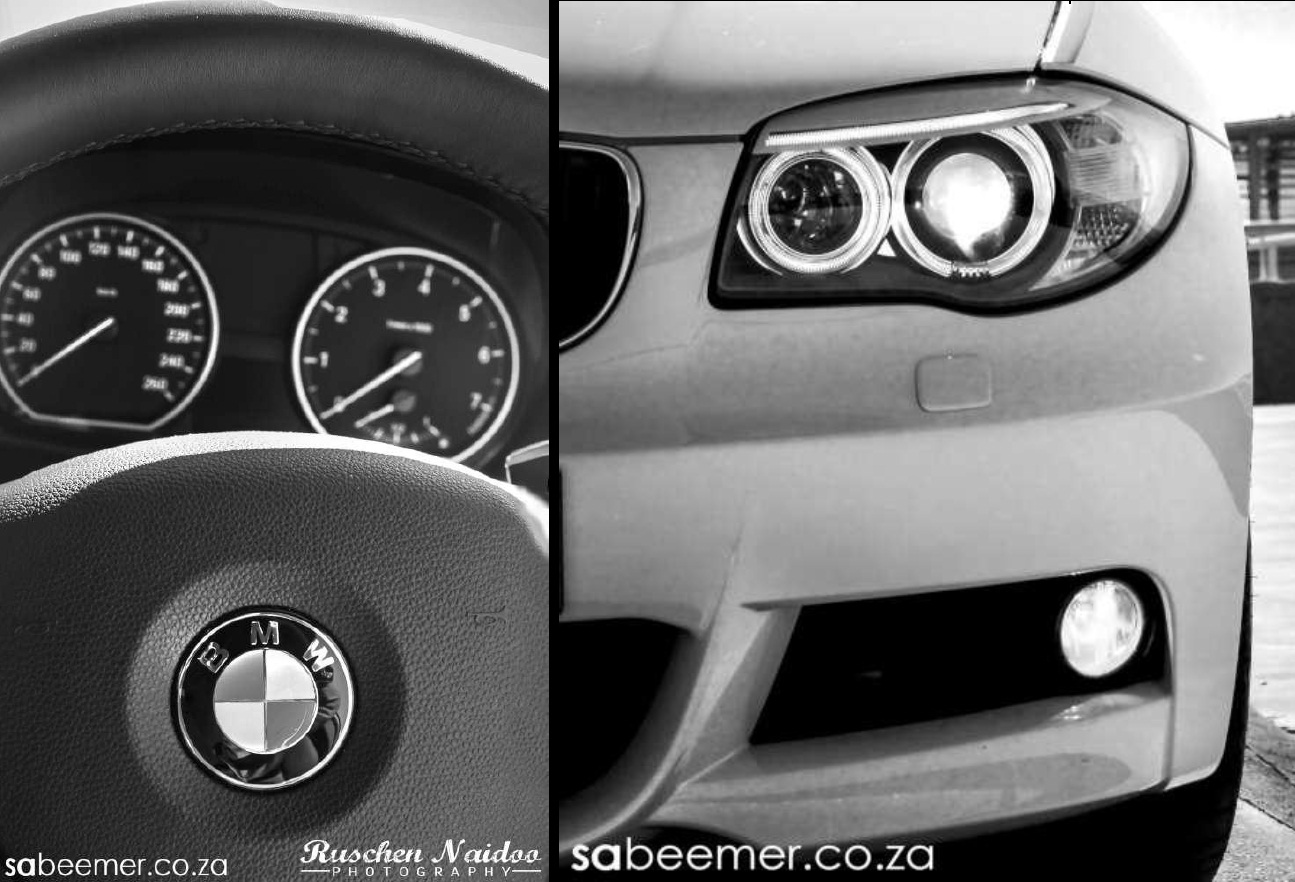 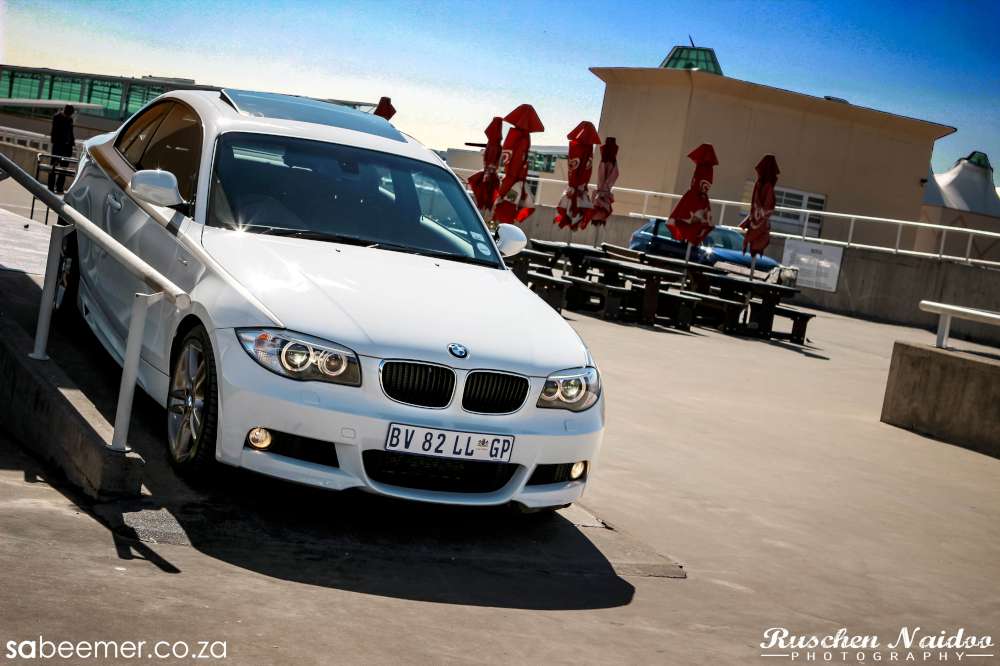 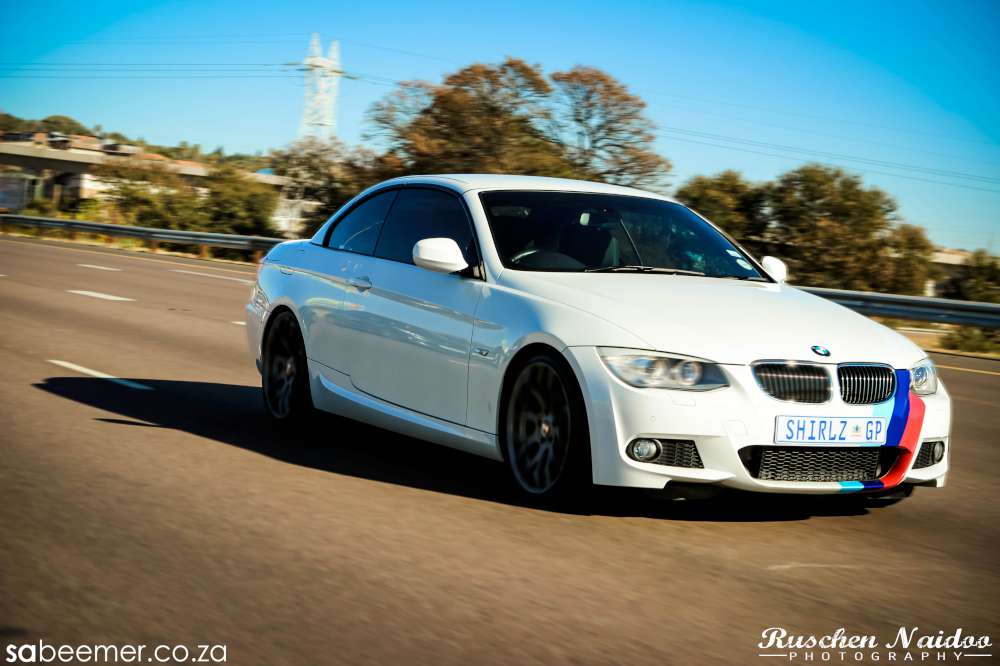 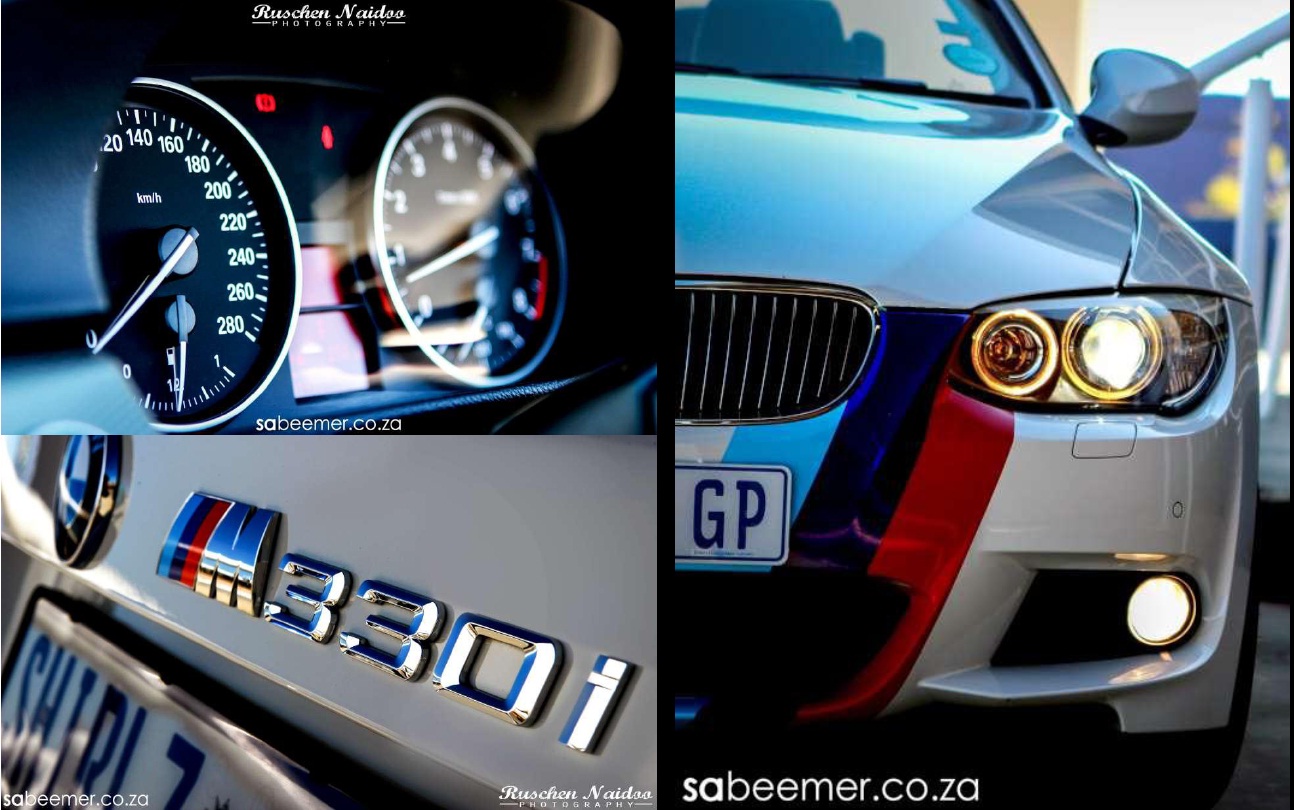 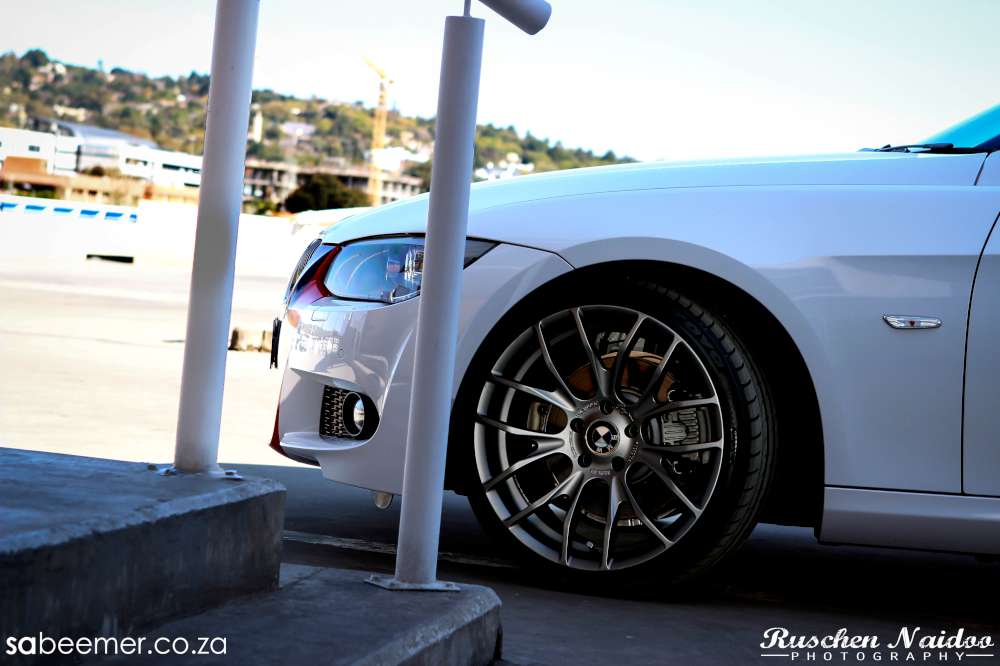 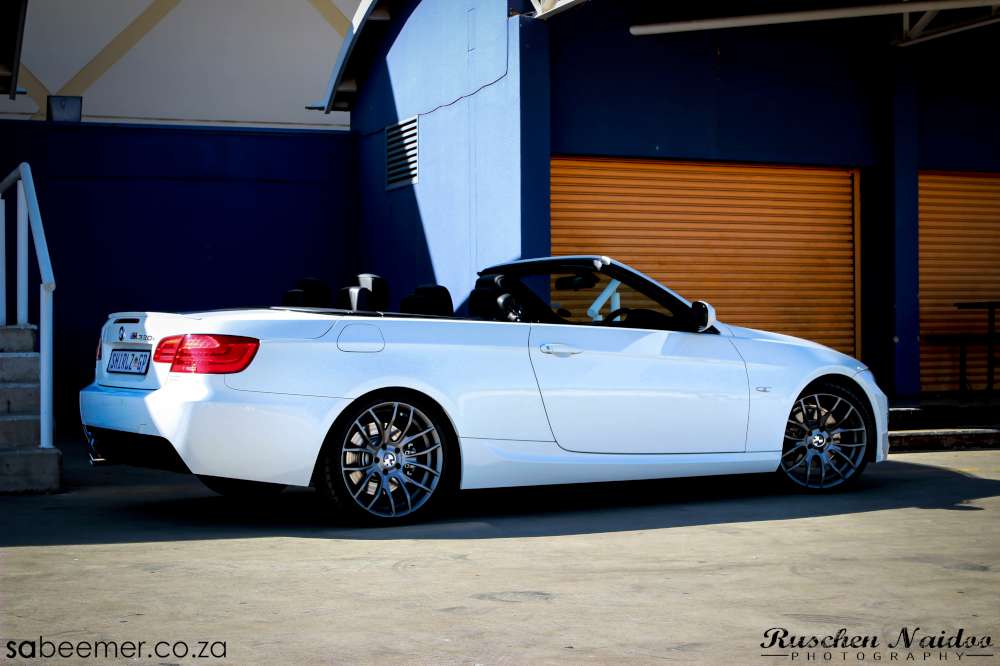 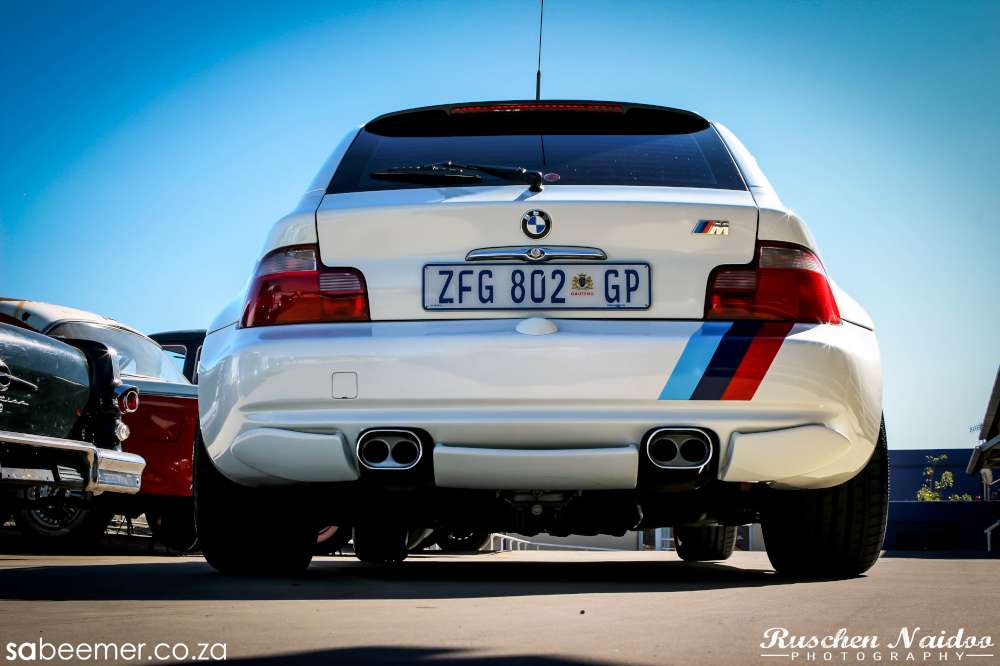 The ///M Coupe received an intensive mechanical “make over” from Alex and his team at Evolution 2 Motorsport in Kyalami.  Evo 2 fitted four new Bilsteins, new clutch, pressure plate, imported ///M flywheel, water pump and performed an inspection 2 service with ///M parts. They fitted the engine stabilizer and 4 X competition spacers (for looks) and did a dyno tune after that.  I imported projector lights (angel eyes) from the US and had it fitted at a BMW approved panel shop in Midrand.  Carello Panel Beaters in Kyalami cleaned the under chassis for me and colour-coded the mags.  Carello also did the touch up on nicks in the paint and performed a polish job on her. I added some BMW hard polish afterwards to get the shine back and it looks good.  She will get another polish in due course. 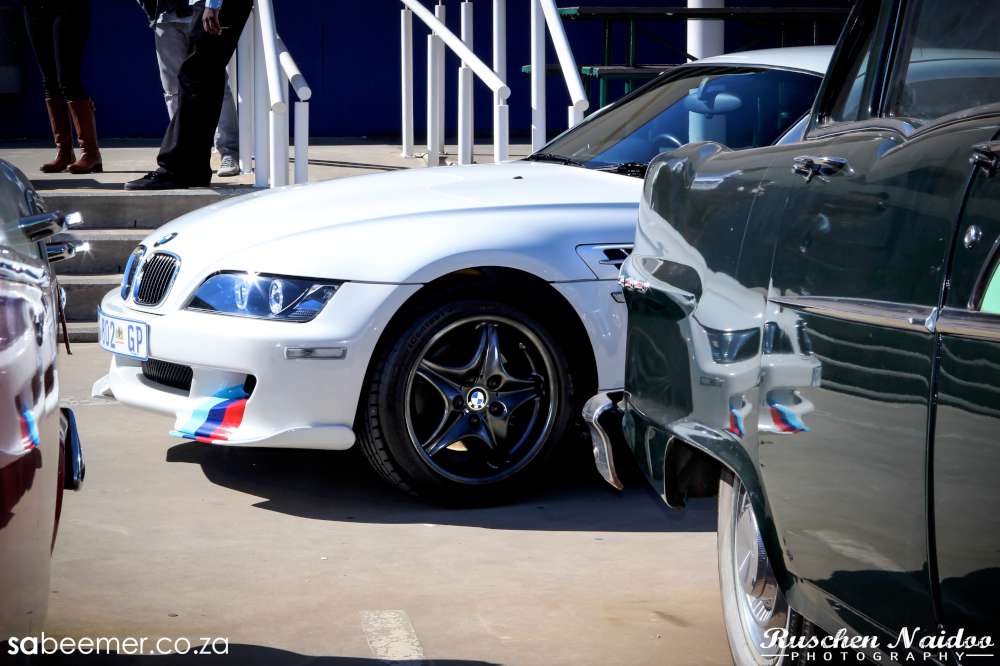 About two months back we decided to fit ///M stripes to the 3 cars just to be different.  This proved to a mission as many “experts” in this field was too afraid to do the job (BMW branding issues and losing vendor status).  Some of the big guns never came back to us even after we have posted requests on their websites…then came along Mohammed Rasool of SABeemer and the problem was solved as is evident from the pictures in the photo-shoot. 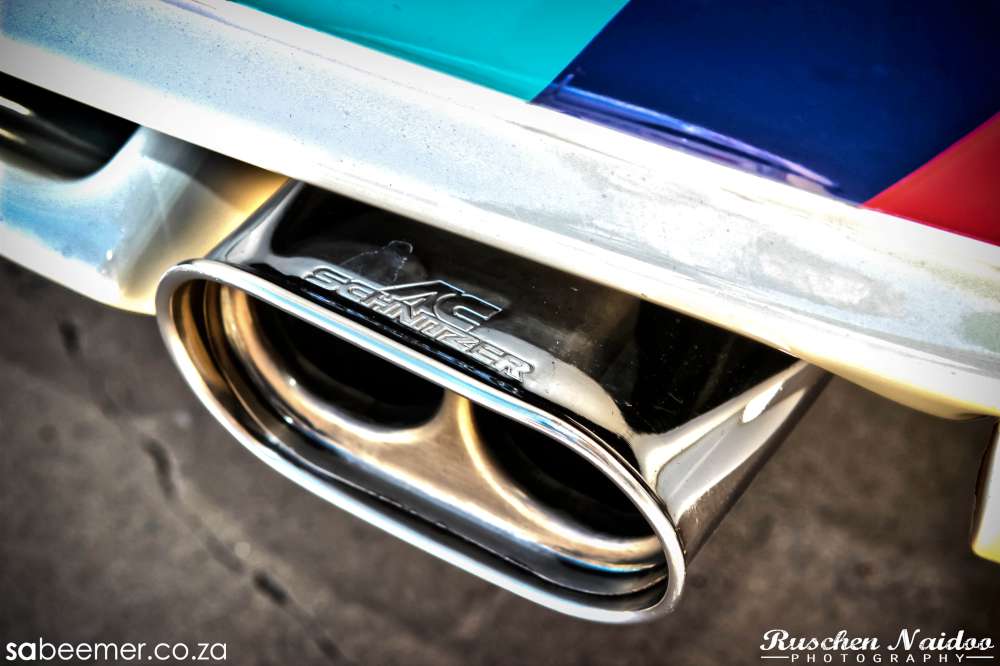 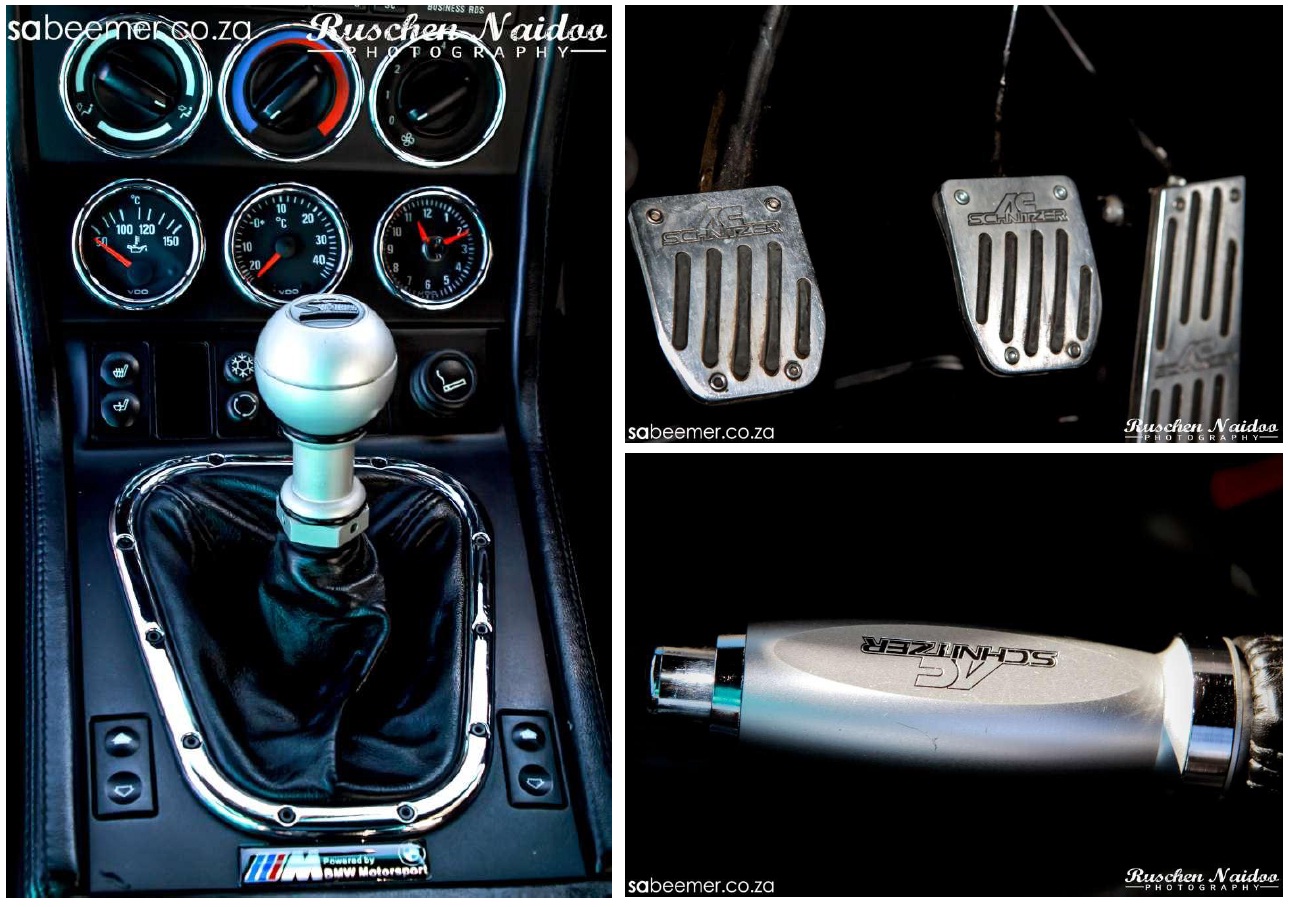 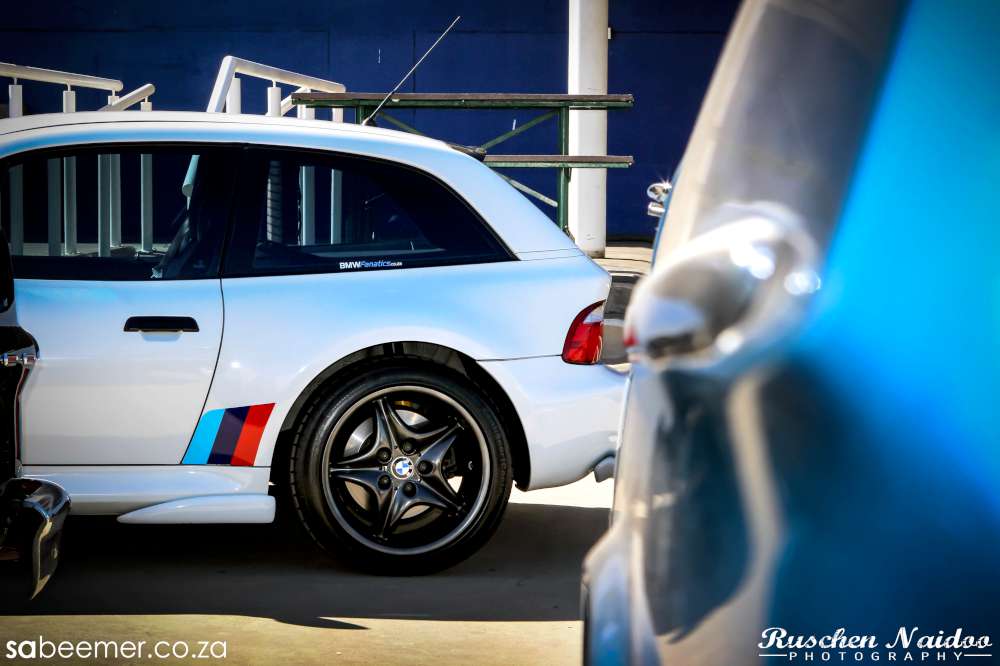 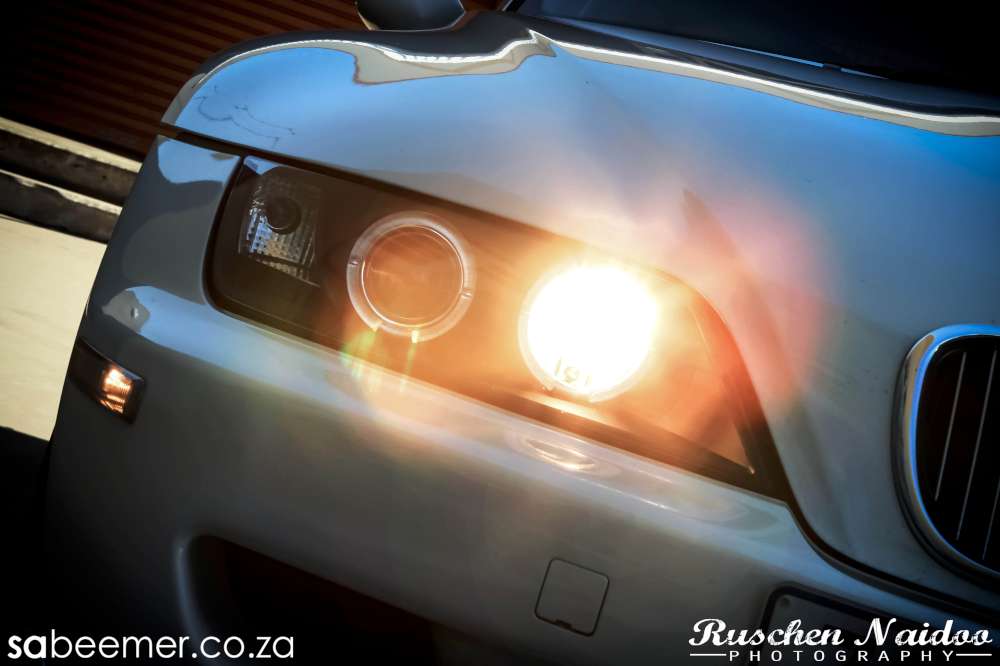 Would we sell our cars?

I’m always in the market.  Should a beautiful, unspoiled, original E30 333i or an EVO 1or 2 comes along I will consider a deal on the ///M Coupe.  I’m also still hooked on the E86 and am of the opinion that it is one of the most beautiful body styles BMW developed.  I can see myself in an Alpine white ///M Coupe, that’s original and was not raced and abused.

Our accolades go to the following persons:

and last but not least!

My lovely fiancée, Shirley Naidoo, for your BMW passion and allowing me to love my cars and pamper them too.”

SABeemer thanks Bouts, Shirley and their team for their time, efforts and accommodating our request, We wish them  all the best of happiness for their future.J

Some more excellent shots from our brilliant Photographer