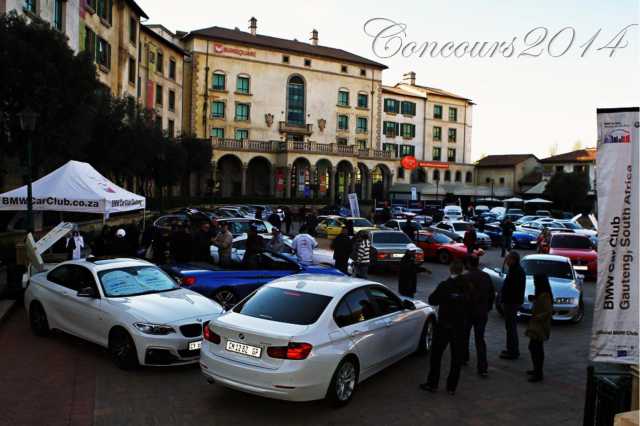 This might not be Lake Como but the level of enthusiasm and passion displayed at the 32nd annual Concours d'Elegance of the BMW Car Club Gauteng (South Africa), is second to none.

The annual BMW Car Club Concours d'Elegance was held at the Montecasino Piazza. It is as if it was made to host the Concours, the Piazza staging the show with the beautiful Tuscan architecture forming the back-drop. With the perfect setting all that was needed was for the African sun to make an appearance. Well it sure did not disappoint, what a glorious day it was albeit the last day of the South African winter.

South Africans love affair with the blue and white roundel started when a German immigrant brought the first BMW motorcycle to South Africa in 1928; it might not have been a car but it was a BMW nonetheless. Four decades later assembly of BMWs in South Africa was started by Praetor Monteerders in 1968. By 1975 BMW AG realised the potential and bought out Praetor Monteerders establishing BMW South Africa, and thus the first BMW plant outside of Germany took root. More recently South Africa’s youth voted BMW as the ‘Coolest Motor Vehicle Brand’ and ‘Coolest Brand Overall’ in a survey conducted by the Sunday Times.

The Piazza was stretched to the very limit and could not accommodate one more BMW without infringing on municipal safety regulations. This meant that the overflow had to park on the grass area with several participants becoming rather hot under the collar about this. It wouldn’t be a Concours without the South African specials, they were all present and accounted for, the E12 530 MLE (the first BMW to adorn the M plate), the E23 745i (sporting the M88 motor as first used in the M1), E30 333i and the E30 325iS (the final iteration pushing out 155kW (208hp)). The Henna red 333i parked on the grass sure was a looker, probably the only one that I’ve seen in this hue.

Bespoke BMWs built during the late ‘90s are virtually non-existent unless you are talking about the E38 7 Series L7, hand-built and targeted at the uber rich, think oil tycoons and you get the picture. This is the only one that I have seen in South Africa, it is 25cm longer than the normal E38 long-wheel base with a 5.4-litre V12, M73 engine. With more computing power than the Space Shuttle, the rear high tech command centre came with every conceivable luxury feature and more, these included: electrically adjustable rear seats, leather upholstery, electric rear blind and side blinds, electric sunroof, rear footrests, fold down rear trays, illuminated rear vanity mirrors, rear television screen, video player, integrated fax and pc with internet connectivity. Let’s not forget the discreetly positioned refrigerator complete with crystal to enjoy your bubbly or well-aged single malt. Less than a 1000 were produced over two years.

With only five M1s that I know of in South Africa it was a real privilege to have two at the Concours both having been driven there, nice to see that these are no trailer queens. Other rarities included the 700 Hans Stuck replica, that is a true tribute to the winning car of the 1960s. Even rarer than the 700 was the off-white 2000 Cheetah that Marek Letowt’s father brought; it was manufactured in the then Rhodesia. Evolution 2 Motorsport, specialists in servicing BMWs as well as building, preparing and restoring older racing BMWs; part of their display comprised of a Batmobile which they unveiled at the 2012 Concours as well as the Tony Viana Winfield E30 325i Shadowline that they restored. If that was not enough they unveiled a replica of the Group A Schnitzer BMW 635CSi the first racer that they have built (over the last five years) that they actually own and intend to campaign. Mixing it up with these racers was another Batmobile which is campaigned in the historic racing series by Graham Nathan. Last but not least in terms of the racers was the Jägermeister E30 325iS owned and campaigned by Don Salt in the BMW Car Club Race Series. The engine is from an E36 328i, the five-speed gearbox and front suspension from an E36 M3, rear suspension from a Z3 coupled with a limited-slip differential.

There was also plenty of newer Bavarian metal on display from participants, while Cedar Isle Auto showcased the very latest BMW has to offer, which included an M6, 435i, 335i, 428i Convertible and a X5 40d. BMW South Africa also came to the party with a 220d with M Performance Kit, 435i Convertible, X5 40d and 4 Series Grand Coupe. The 220d was definitely the pick of the bunch, the M Performance Kit accentuating the lines and stance of this pocket rocket.

The Concours however is not just all fun and games, it is definitely the most prestigious event on the Club calendar but it is also the most fiercely contested BMW competition off the race track. The Concours really heightens the passion that BMW owners have for their cars and nowhere else have I seen more grown men and women so close to tears.

Jack Kaplan’s 2002 Turbo cleaned up nicely taking the following classes: d’Honneur Modified, Best Classic and Best 2002. It also happens to be the only running 2002 Turbo on the African continent. Robin Sadler’s Z3 M Coupe took a well deserved win in the d’Etat class as well as in the Best M class. This car is absolutely pristine and dare I say it, looks better than it did when it rolled off the showroom floor when he acquired it new in 1999 and has just 45 321km (28 161 miles) on the clock. First- time entrant Bilaal Mia surprised no one by taking the d’Elegance class with his white E30 318i Coupe; this car pays homage to the model most revered in South Africa, the E30. Judges could not fault Gerhard van Niekerk’s 1995 E36 325i convertible which he uses as his daily drive with 223 663km (138 977 miles) on the clock, thus taking the d’Honneur Stock class, last year he took the d’Etat class, his Beemer seems to be getting better with each passing year. The prize for the biggest South African BMW Icon, the E30 325iS went to Mike Salt for the Best E30/325iS. Another first-time entrant Alex Johnstone took the Show & Shine class with his 2004 E46 330i, what a gem of a car and definitely a future classic.

The many folks that I interacted with during and after the Concours reckon that it was by far the best Concours they attended, if the number of participants and spectators is anything to go by then I would have to agree. So job well done to the organisers at the BMW Car Club Gauteng, l know that many are already starting to count the days to next year’s Concours.

More pics in our GALLERY