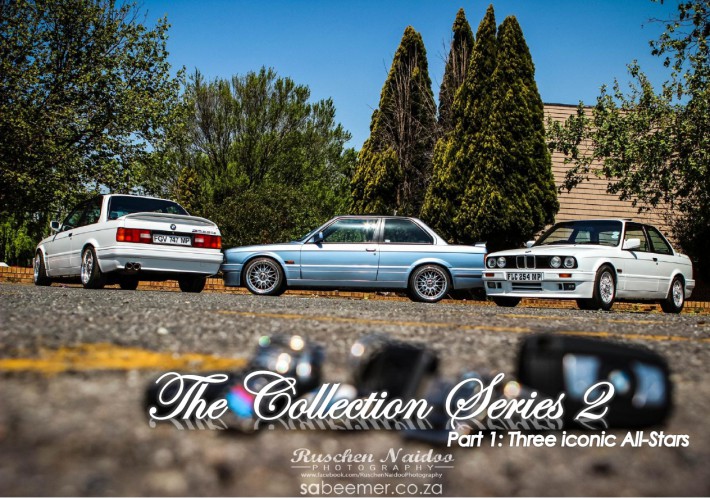 Gusheshe is a term South Africans use to label the iconic E30 BMW 325iS. I was surprised to find out that not every black person speaks the Zulu language – one of SA’s 11 official languages – hence making the task of finding the correct translation of the word a bit challenging.

One certain aspect of ‘Gusheshe’ is that it started as a slang word in the Townships.

While some comment that Gusheshe derives from the word ‘ghosha’ – which translates to hurry, fast or go rapidly, others say It signifies and relates directly to the tsotsi lifestyle and the ghetto sport of Spinning.

“Originating in South Africa, the word Gusheshe refers to the BMW 325 iS model usually pre '93 models. The car and word is equivalent to the cult status of the American Mustang Shelby. The meaning of the word 'GUSHESHE' means 'PANTY DROPPER' in English.
From the streets of Soweto to the flats in the Cape to the township of Umlazi, this word crosses the mouths of local South Africans on the regular. This car has gained immense popularity as well as notoriety over the decades, having been used as the getaway car of choice in many a heist. It is hailed as THE car of all cars to local drag racers and car fanatics in SA alike for its spinning, racing and drifting capabilities. Recently the South African hip-hop scene has come out with tracks mentioning the cult classic, Rappers AKA, Cassper Nyovest -Gusheshe ft Okmaloomkoolkat as well as rapper Sheen Skaiz Gusheshe versace freestyle. Original South African underground culture eg: guy sees a 1989 BMW 325iS, he shouts ...... 'AWEH , CHECK OUT THE RIMS ON THAT GUSHESHE BRA, THAT SHIT IS GAADLY'”

Robert Mabusela once wrote about the BMW 325iS :

On paper in writing of course respect can be defined in one sentence: a feeling of admiration because of their good qualities or achievement, taken from the oxford dictionary a reliable source. Yes this is the definition of respect which one can take and use in their own way and yes that’s what I am about  to do define respect using one of German brand BMW`s car

The BMW E30 325is, a car that you`d swear was designed in our country because of the way South Africans respect the 325is in fact we respect it so much that we take it as one of our own. South Africans have even gave it a proudly South African name “Gusheshe” not every car from the 20th century can be parked next to one from the 21st century without the driver feeling ashamed of owning an old car.

So how did the Gusheshe earn respect? well it`s simple through lots of Smokey doughnuts. In America doughnuts are associated with cops as their favourite and easy meal on the job, but here in our country we associate them with rear wheel drive cars mostly the Gusheshe.  The Gusheshe has baked the most doughnuts in South African motoring history hands down, it is so familiar with baking doughnuts that you can create a recipe book featuring all the different doughnuts using the 325is that’s if you have the techniques and driving skills to control the Gusheshe, in the book you would feature all sorts of doughnuts from the traditionally circle shaped doughnut to the proudly south African koek sister ,burning lots of rubber in the process.

So if you want to be respected I advise you to get yourself a Gusheshe, you can even park it next to presidential cars like it`s bigger brother the BMW 7 series without feeling like an ordinary citizen.

An IOL article once featured gave this description:

Gusheshe - The doughnut king. This nickname’s been given to older E30 or “box-shaped” BMW 3 Series models, and translates into “very fast”. These cars, more specifically in 325i or 325is trim, have become popular in the local “spinning” scene because of their rear-wheel drive layout and easily controllable nature while doing doughnuts and burnouts.

All these translations and meanings confirm that the E30 325iS is indeed legendary, as we have harped on and on before. But here it shows just how this cult classic has moved on from an era when these cars were brilliant Race-Track champions in our foregone Stannic Group N Racing Series.

Track inspiration was then used in the road-going cars to give true purpose of the words Sheer Driving Pleasure to the public, and now some 24 years on, this vehicle is still in the limelight.

Whether you are a car collector and remember those glory days of racing, or even if you are a youngster in which case, the 325iS’ age surpasses you, you want one of these cars.

Fortunately we have people who treasure the appreciation of this legendary vehicle and afford us that cannot get their hands on a good example - (even though some might have bags of cash ready with 325iS labeled on it just in case one does pop up somewhere) - the chance to enjoy the presence of such a phenomenon. 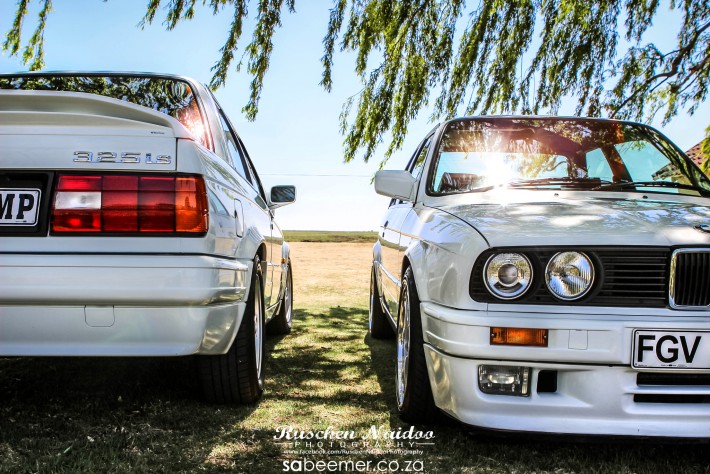 These 3 Gusheshe’s you see here belong to one household. Two of them belong to Mr Faisel Karim, and the other to his son Nishar.

Faisel has been blessed with a pretty sum of BMWs in his collection which we will run as a series of features, but we start off with the South African favourites. 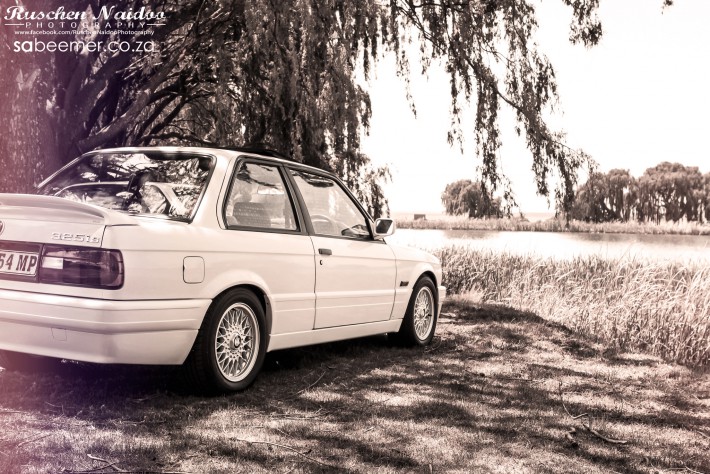 This Ice-White prime example rewarded Faisel with an honour of ‘Best BMW’ at a Magaliesburg event earlier this year. It also came first in the E30 Category at a SouthSide Crew event in Johannesburg. 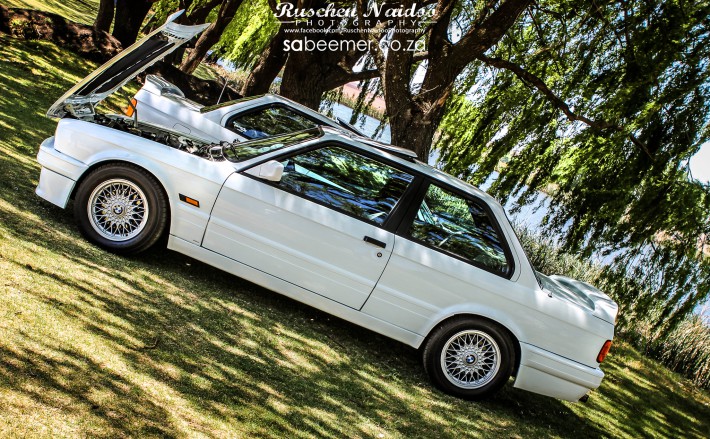 Its original 15” BBS Spoke wheels still sport the old Continental Contact tyres, and the spare wheel was never made use of. 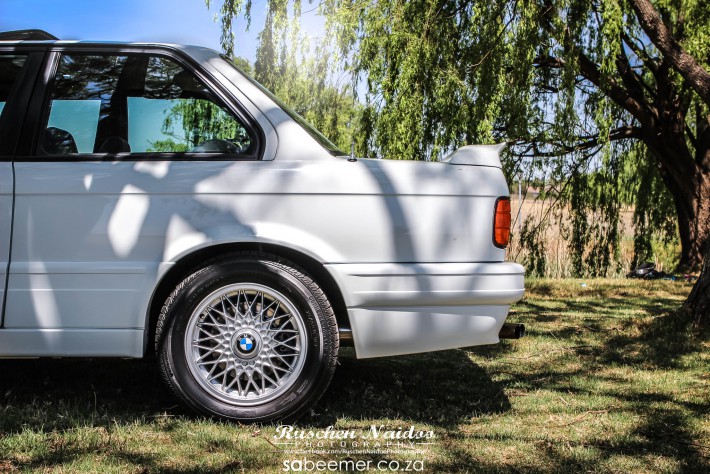 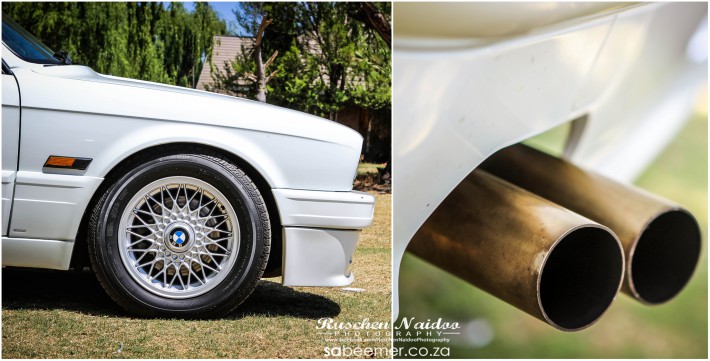 With 142000kms on the dials, the Interior is still factory fresh with the seats covered in the desirable Ubekaro cloth fabric. 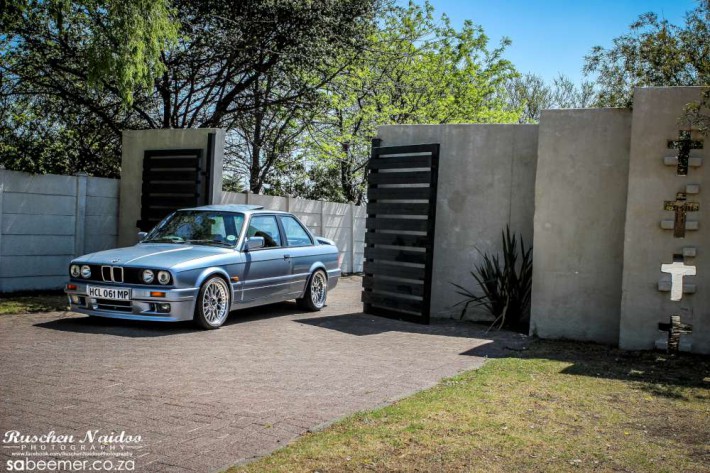 Faisel saw this vehicle a few years ago at the annual George Motor Show and kept tracks on the vehicle until it came up for sale. And with such persistence and commitment, it’s no surprise that he finally got what he was after.

This car is also pretty much standard with changes only to the wheels. Here 18” Rezax rims were an afterthought. 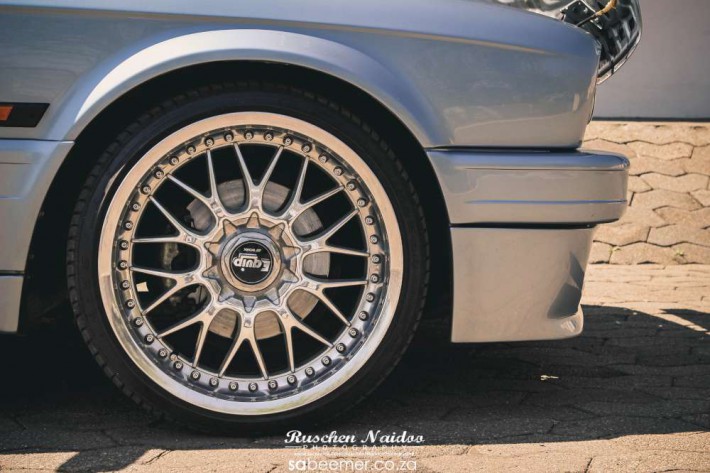 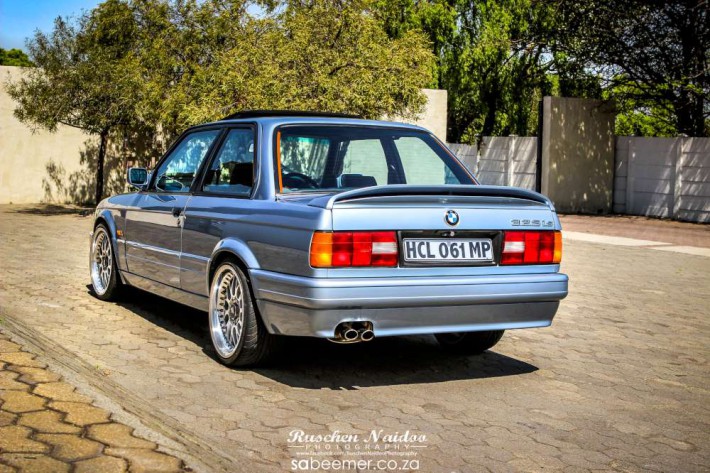 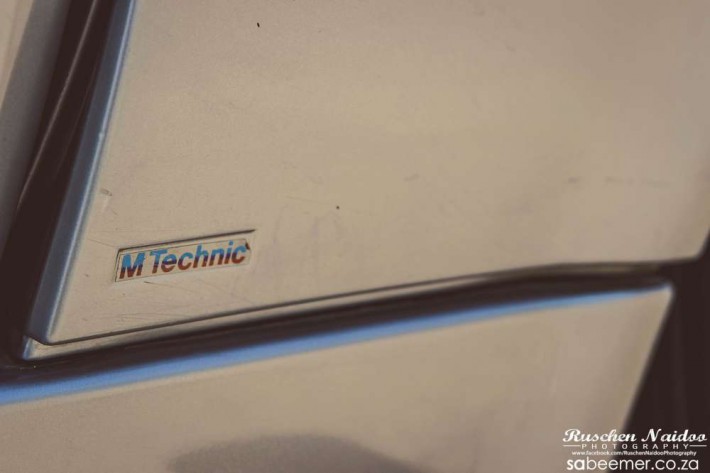 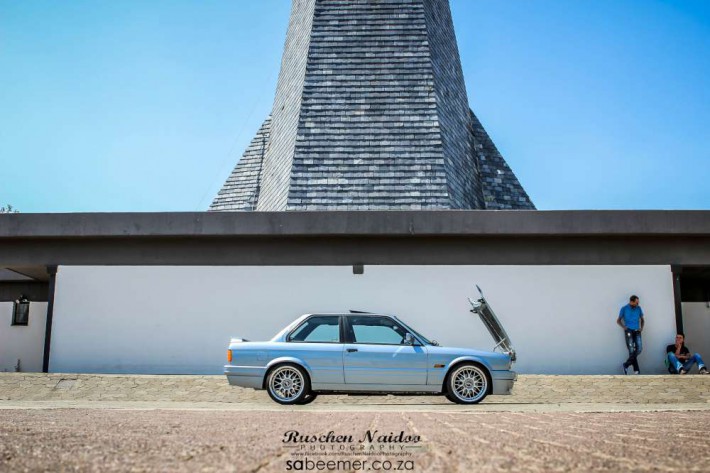 Mileage is only 149000kms and this car has leather seats.

The last in this trio of iconic motor-stardom is another Ice-White Evo1 model with 126,000km of mileage. 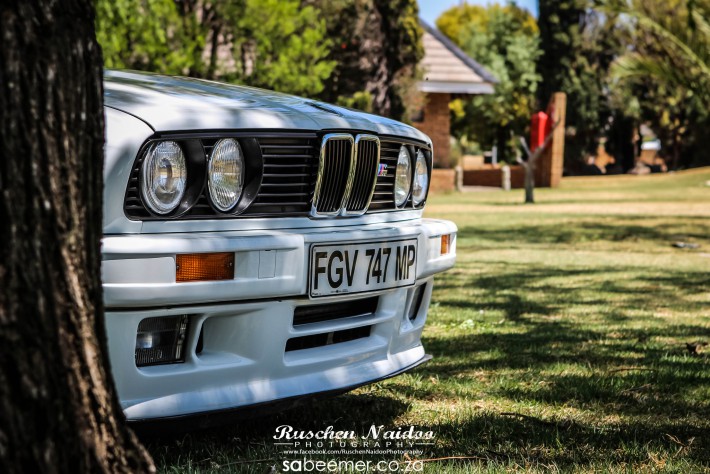 Faisels son Nishar added some individuality to this vehicle in the form of an Alpina steering wheel, an Evo2 spec Venturi front lip, and 17” Work wheels. 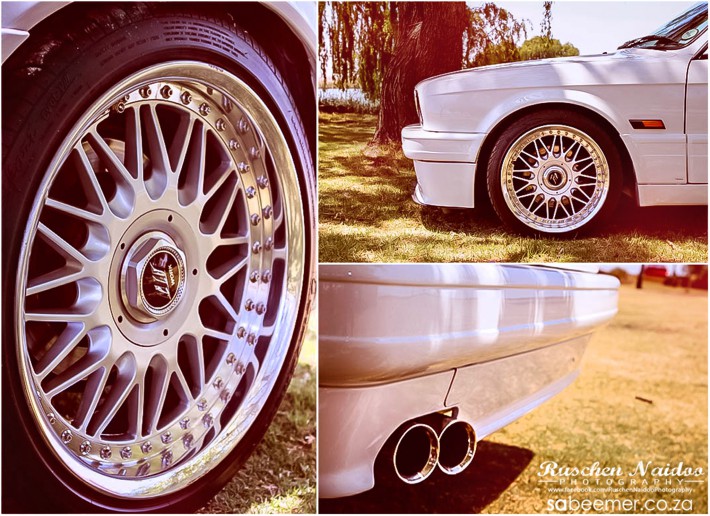 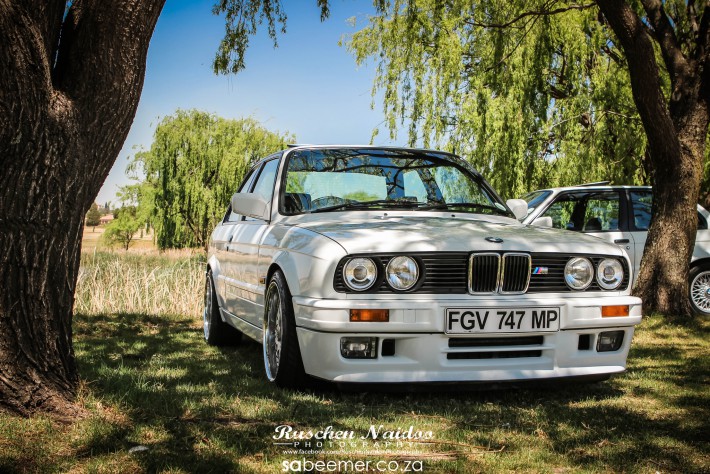 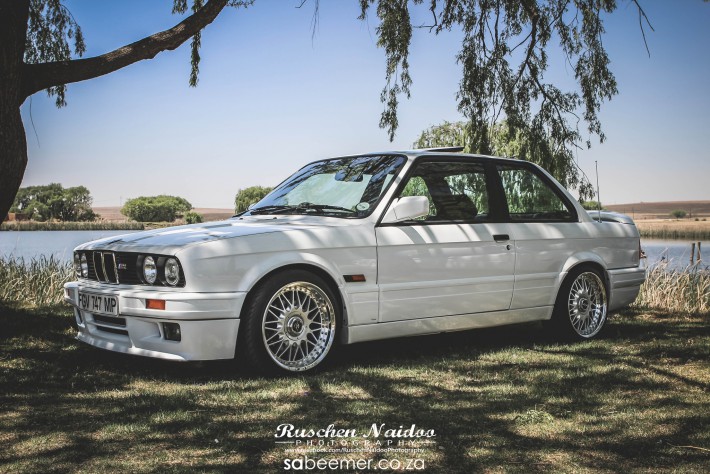 All these cars are superbly maintained and kept as unspoilt as could be appreciated. 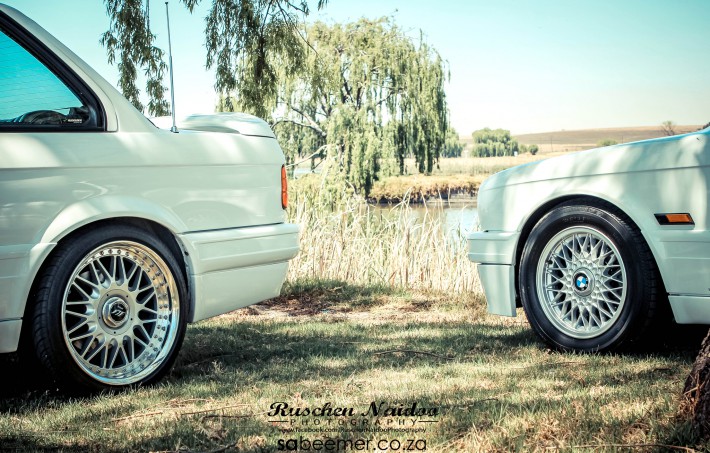 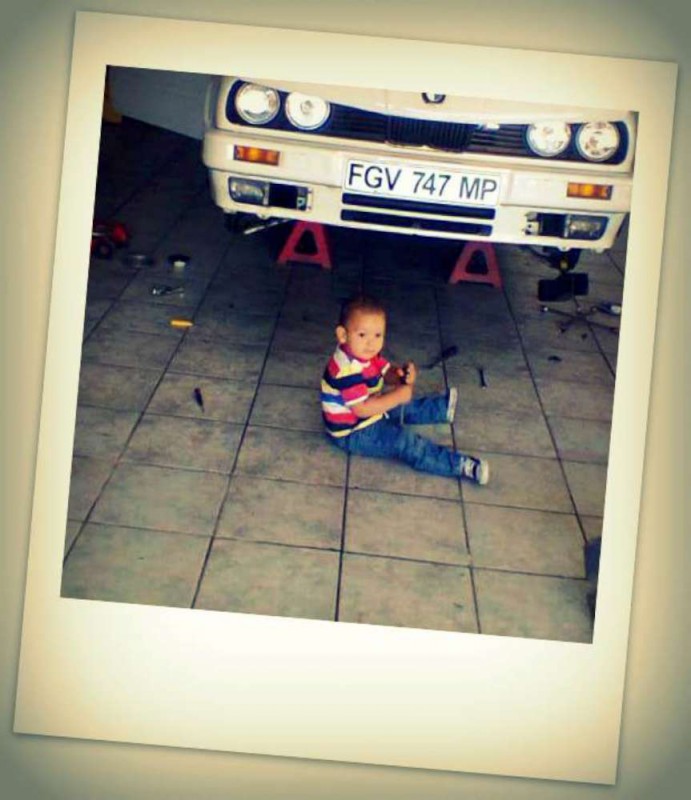 We talk to Faisel about his passion and a bit of history with the BMW Brand.

Total tally of BMWs over the years tops a number of 60 different BMW vehicles. His favourite of them all is the E30.

He mentions it is the shape of the E30 that makes it special.

His first E30 was a brand new diamond black 1989 325IS. The car was sent in to Lupini Performance for an upgrade to the motor as the Schnitzer conversions offered by JSN were unaffordable at the time.

We’ll continue with Faisel and his collection with the next car, a 2002 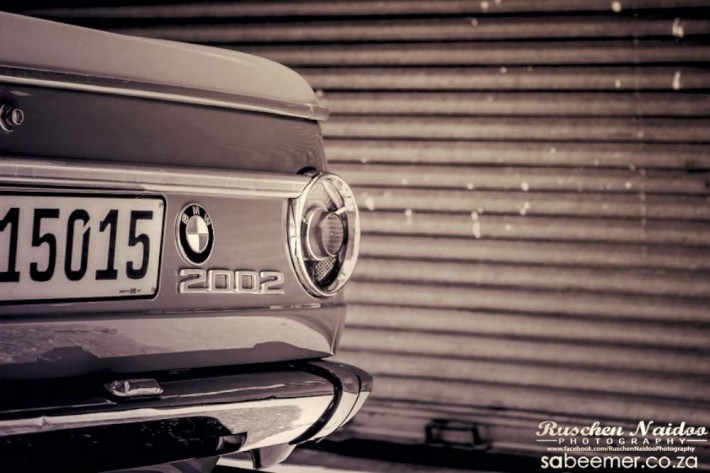